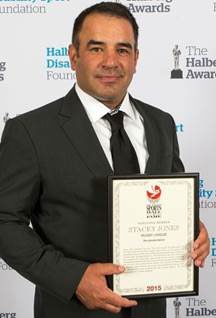 Stacey JONES Ngati Maniapoto, Ngapuhi
Taken from the Mad Butchers Newsletter “Well Done the Little General I have decided that I did not give enough recognition to one our all time greats, the Little General Stacey Jones, who has been inducted into the New Zealand Sports Hall of Fame.
We hear about the Sports Hall of Fame but did you know that there are only seven other league players ever recognised? So now Stacey is alongside Albert Baskerville, Tom Baxter, Mark Graham,
Ces Mountford, Charlie Seeling, George Smith and Des White.
I had the great privilege to be on stage when Stacey, 38, was honoured. “I feel very honoured and
humble. When I reflect on where it all started, it was at my junior club, the Pt Chev Pirates.”
Late last year Stacey was also inducted into the Maori Sports Hall of Fame.
His career really was stellar – 261appearances for the Vodafone Warriors, 46 tests for the Kiwis, 45
appearances for Les Catalans, and he still holds Vodafone Warriors records for most appearances, most points (674), most consecutive appearances (100) and most field goals(14).”

Courtesy of The Mad Butchers Newsletter