n excerpt adapted from the 1982 magazine article by the late W.W. Marsh and updated at regular intervals by NZMGA National Secretary)- “The earliest evidence of Maori Golf that has been discovered dates back to the 1800’s. Balls were hit off mud-heaped up tees using the clubs fashioned from Manuka and gorse. No knickerbockers or fancy skirts for the players, merely tartan blankets, used as rapaki by the males, korowai for the females. No shopping at the Warehouse for bargain golf shoes either – bare feet were the order of the day. Fifty years later, at Waiohiki, Napier the first Maori tournament was held. Mr Kurupo Tareha Patron, H.M. Tatere Secretary and Turi Carroll President, were the first office bearers and were elected at the inaugural meeting held in 1930.

The committee consisted of P. Keiha, S. Ropata, J. Hape, W.T. Kuru, J. Carroll, R. Halbert, W. Desha, A. Whitiwhiti, W. Paraha and Rev. Wharetini Rangi. The following year the New Zealand Maori Golf Association was established. Records of those very early days are unavailable there one can only speculate on the number of participants and the interest shown in the game. However, given the climate of the golfing fraternity at the time, we can assume that the number of golfers in the field in those days were much smaller. Without the modern means of transport, going from one venue to another had its drawbacks – imagine travelling from the far north to Wellington on a horse-drawn buggy or a Model T! It would be pretty hard to justify a month off work to play golf for one week! Apart from travel Maori were not as welcome on the golf links as they are today, and worse still, young players were not encouraged – a trend which continued evening during the 1950’s and 60’s.

The ladies equivalent to Trevor Ormsby can in the form of Polly King, who has held the title an amazing 8 times from 1982-86, 90, 93. The first of the young guns won her first title at the tender age of 14. Wiki Shailer took the title in 1995 and again at Taupo in 2000. Another young promising golfer, who is currently a member of the NZMGA Executive, Aroha Tito, won her first title in 1996 and again in 1999.

Walter Godfrey represented this country on a number of occasions but turned down a trip to South Africa when he was elected for N.Z. in the World Amateur team in the early 1960’s. He later turned profession. Philip Tataurangi and Michael Campbell a titleholder in 1991, have both become professional golfers, Michael winning the US Open in 2005 and receiving the prestigious awards of New Zealand Sportsperson of the Year 2006 and New Zealand ‘Albie Pryor’ Maori Sportsperson of the Year 2005.

Miss Frances Pere was only 15 when she won the first of her four titles and went on to represent N.Z. in Australia at the age of 18 and the following year at the Commonwealth Championships in England. Similarly Brenda Ormsby has represented NZ on more than one occasion and is currently the resident pro at Springfield. Teria Sandle (nee Te Riini) 2006 at the age of 15 became the holder of women’s course records at Levin, Kawerau and Te Teko Golf courses.

Maori Golf Tournaments are a platform for many young golfers to display their talents and launch their careers. However, let us not forget that apart from all the young, supple and talented golfers, there are also those who had the dream and those that continue to enjoy the friendship and sense of fun that golf brings. The Masters and Golden Girls are a reminder of those early beginnings and it is they that hold fast to the kaupapa, treasure their Whanaungatanga and thoroughly enjoy renewing the many friendships built during their years on the circuit. Playing on the same course as the Kaumatua is an experience, for instead of hearing anguished sighs when a shot goes astray or a putt is missed, one is treated to great shouts of laughter and Maori humour.

The late Mr Tom Maniapoto ex-President of the association, once stated; ‘much water has flowed under the bridge since 1930 and no doubt much more will flow in the years to come but I, for one, will treasure all of the many friendships that have been made in the past and no doubt will be made in the future. This is what golf is all about – meeting old friends and making new ones.’

“In 2006 Patron Te Ao Peehi Kara passed away – New Zealand Maori Golf Assn paid tribute to his memory by holding a tournament in 2007, hosted by Ngati Kahungunu. Rangatahi support has been fostered and promoted well since 2003 by introducing the New Zealand Maori Golf Assn under 19 National tournament – the first 2 tournament being held at the Ballantyne Golf Resort then transferred to Ngaruawahia Golf Club for several years. 2011 saw the tournament held at Te Awamutu Golf Club, and it is intended to synchronise the tournament with where the national championships are held in that year. The tournament is growing in stature and whanau support. NZMGA thank those hosting rohe for their support of this tournament.

The illustrious complete list of Past Champions is hereby noted:

2013 – The newly created kakariki logo created by Mr Richard Garrett – used for the purpose of Marketing and Promotion of the association.

The iconic kikorangi logo will continue to maintain its mana – being used for constitutional and legal purposes.

April 2015 – inauguration of the Aotearoa Maori Hall of Fame. 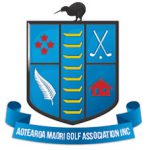