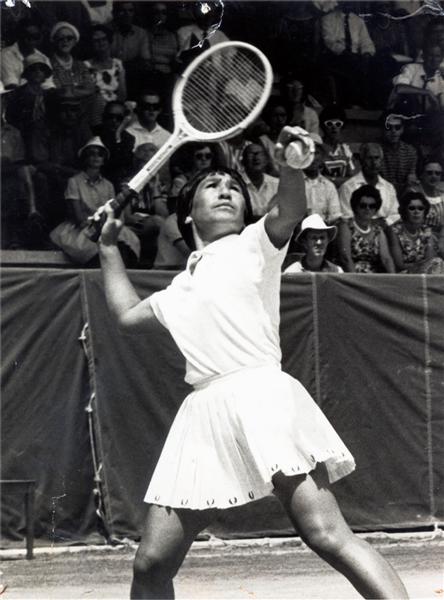 In 1944 the family moved from Tikitere to live in Te Koutu, Rotorua, which is situated across the Utuhina River from Ohinemutu where her grandparents lived. Ruia received her early education at Rotokawa and Rotorua Primary Schools. She attended Rotorua High School, and for a short time, attended Te Puke High School, before moving to Auckland in 1953 where she enrolled at Queen Victoria School for Maori girls.

After completing her secondary education she attended Auckland Teachers’ College. Coinciding with the family move to Rotorua, strong interest was being promoted to revive Maori tennis through marae-based and iwi competitions. Hingawaka Morrison, a keen rugby and tennis player, became actively involved with the Te Koutu community, to build two tennis courts. At first sight of the game, Ruia, at eight years of age, was hooked and became a hoha to the players. To keep her off the courts, her Dad fashioned a wooden bat so that she could practice on the walls of their weather-board house. Many handy tips and strategies from her Dad were passed on at the time. If set targets were accomplished, she could play on the courts.

Competitive tennis for Ruia began in Rotorua with inter-marae exchanges around Lake Rotorua. In 1949 Ruia and Joe Paul were included as Juniors in the representative Te Arawa Lawn Tennis Sub-Association team to compete against other Iwi at the NZ Maori Lawn Tennis Association Tournament in Gisborne. A huge bonus for Ruia and Joe was the special presentation to each of them by Sir Apirana Ngata, of a small silver cup for the ‘Most Improved Juniors’ at the tournament.

For the next two decades Ruia competed in as many Maori Championships as the National and Provincial calendars would allow. Christmas tournaments at the Government Gardens in Rotorua and the Bay of Plenty Tennis interclub games also kept Ruia busy, and wherever possible she was encouraged to play in grades above her age group to gain experience. When Ruia Morrison burst on to the tennis scene as a top junior in the mid-1950s, a much needed breath of fresh air was blown into the women’s game. Here was a player with charm, a warm personality, guile and an excellent all-round game, who could give the country’s women players long overdue recognition from the sport’s hierarchy.

While attending Auckland Teachers’ College, she played Caro Bowl Interclub for Eden-Epsom and also began a long tennis relationship with Heather Robson. Robson was a great tactician and doubles guide and they formed an excellent combination. During this time she also represented Auckland in netball. In 1955, at her first National Senior Championships, she shocked a string of leading established players on her way to the final (Elaine Becroft, Betty Nelson and Pat Nettleton) before Sonia Cox turned the tables with Ruia so close to winning.

Ruia won her first National title the following season, avenging her loss to Cox by beating the Wellington player 6/3, 6/3 in Auckland. By this time it had become obvious that for Ruia to make any progress in tennis she needed overseas experience. John Waititi, a teacher with a keen interest in most sports and who was a tennis umpire, had already helped a number of Maori sportsmen and sportswomen. He suggested sending Ruia to Wimbledon. A ‘Ruia Morrison Wimbledon Fund Committee’ was established. John launched a major fund-raising appeal assisted by Mr and Mrs Lionel Trotman, Phil and Nan Howell, Mr and Mrs Kelly Harris and Sir John Turei to name a few, initially through the Maori tribes, but later, nation-wide, to get Ruia to Britain.

The appeal exceeded all expectations, bringing in £2,000, more than enough. The excess was kept for a second trip. The New Zealand Lawn Tennis Association had offered £25 pounds, but this was politely declined. Ruia set off overseas in 1957 with her doubles partner, Heather Robson. They were officially attached to the NZ Davis Cup Team.

As the first Maoriand the first NZ women to play at Wimbledon, she was impressed, but not over-awed by Wimbledon. In fact, she made people aware of New Zealand as a tennis nation by winning a series of tough matches. She beat Billy Woodgate, J.L.Debford and Sheila Armstrong to reach the fourth round where she met her match in Betty Pratt, the number four player and manager of the United States team. It was a stunningly successful debut in Europe for Ruia. At the invitation of Betty Pratt, Ruia joined Maria Bueno and Althea Gibson in the Caribbean early in 1958 for the first tournament that marked the beginning of an International Circuit for most international tennis players. Tennis enthusiasts in England were often impressed with Ruia’s touch, skill and placement. The purists particularly liked her superb forehand and she won many points with a fine stop volley.

In 1959, she lost to Christine Truman in the quarter-finals of the British Hard Court championships, won the Guildford Championships by beating South Africa’s Joan Cross, and the mixed-doubles with Mexican, Gustavo Palafox. Ruia and Pat Nettleton reached the third round of Wimbledon Doubles in 1959 and Ruia made the fourth round of the mixed-doubles with Brian Woolf from New Zealand. In singles, Ruia reached round 16 for the third year in a row, this time losing to the eventual champion, Maria Bueno.

In successive years she won the New Zealand National Singles title twice by beating Anne Smith, but her grip on silver-ware was briefly dislodged in the 1961/62 season when Cantabrian, Judy Davidson won. There were enough funds in 1961 to send Ruia to Wimbledon once more. However, she decided to forgo the trip. Instead, the money was handed over to the newly formed Maori Education Board. Ruia argued that the Board’s work was more important than another trip.

During the 1962 season, Ruia won her fifth National Singles Title, even though she was up against players who had had the benefit of an extensive overseas trip in the winter. This time she beat Judy Davidson 6/2, 3/6, 6/4 and added another doubles title with Heather Robson for good measure.

A few months after winning that title she married Kenneth Alan Davy. The couple was to spend some time living in Christchurch and several times Ruia indicated that it was time she gave tennis away. The 1964/65 Nationals in Christchurch brought Ruia her sixth and last National title. She beat the leading British player, Rita Bentley 5/7, 6/2, 6/1.

Early in 1965, Ruia and Waikato’s Elizabeth Terry comprised the New Zealand team which competed in the Federation Cup competition in Melbourne- the women’s long overdue equivalent to the men’s Davis Cup. They were selected after trials in Wellington and did well to beat Argentina 2/1 before losing to Australia 3/0. A few months later, Ruia decided to become actively involved in some aspect of coaching. Rothmans Coaching Clinics provided the perfect springboard. She had been a regular entry in Auckland’s prestigious tournament, the W.D. & H.O. Wills, winning the Women’s title in 1959 and 1960.

In the first, she beat Australians Betty Holstein and Jan Lehane and in 1960, beat the great Margaret Smith in the final and also won the doubles and mixed-doubles. Ruia made a point of making another come-back to play in the first New Zealand tournament in the ‘open era’ (the Benson and Hedges) in 1969.

Two years later, Ruia used all her considerable experience as player/manager to assist the New Zealand team of Marilyn Pryde and Robyn Legg in the Federation Cup in Perth, Western Australia. In all, Ruia Morrison won thirteen National titles, six North Island titles and two South Island, with many more at provincial level.

It was not only the results which saw Ruia make such a permanent imprint on the game, it was her sparkling personality and impish grin that set her apart from the crowd. She was the best thing to happen to women’s tennis in many years. As with the men, the development of the women’s game at this time was hampered by a lack of coaches. There were no women coaching until Ruia and one or two others began devoting time to it. Some would watch and copy the strokes of visiting overseas players such as Darlene Hard, Angela Mortimer, Margaret Smith, Lesley Turner and Jan Lehane. Ruia had spurred some changes to the understanding and recognition of the game.

Her services to the sport were recognised in 1960 when the Governor General, Lord Cobham, presented her with the MBE for services to the Maori people and New Zealand tennis. Somehow, between the overseas trips and tournaments at home, Ruia managed to get her teaching qualifications.

One of Ruia’s most memorable occasions was her first scheduled match on centre court at Wimbledon. She was to play the British number one Junior, whom she had beaten in New Zealand. Her good friend Colonel Legg, the Tournament Referee who used to call her ‘Guide Rangi’ said the crowd would be all for the English girl, but he said to her, ‘You can beat her!’ I was nervous and freaking out when we walked on to the centre court. As I crossed the court, it rained. They postponed the match until the next day. Lucky for me they rescheduled the match for court two, where I was less nervous and won the match. Another memorable occasion was meeting the Queen at a garden party which was organized by Sir Charles and Lady Bennett.

A highlight of Maori tennis was competing in the NZ Maori Women’s Team which played Australia in 1958 in Rotorua. Taini Jamison, Pat Davis, Lilian Adsett, Ann Malcolm, Maryanne Dewes and I, were the members of our team. In the semi-finals of the Australian Open in Kuyong, Australia, I played Margaret Court. Although I lost, it was probably the best I ever played in my life! In 2001, Ruia was awarded Life Membership of the Aotearoa Maori Tennis Association. As a guest, she still attends the annual Maori Tennis Championships. She can also be seen gracing the stands at the annual ASB Women’s International Classic in Auckland.

Ruia Morrison is considered one of the greatest players in the history of New Zealand Tennis. Her remarkable career spanned three decades. Ruia is credited with putting women’s tennis in New Zealand on the map with her charm, grace and excellent all round game. She was a major force in the sport in Maori, national and international competitions. New Zealand tennis was, to a great extent, looked on as a male preserve with little national media interest, particularly in the women’s game.

If the men were frustrated by irregular Davis Cup entries and overseas trips, the women were to a large extent ignored. Many would argue that the gross imbalance remains today. However, this situation has improved to a large extent, thanks to Ruia whose career, spanning almost three decades, helped to give women their place in the sun.

Competed in all the Grand Slam Open Championships –

1959 Toured Singapore, Ceylon, Kuwait and Bahrain with the famous Maria Bueno of Brazil.

Ruia’s services to tennis were recognized with an MBE in 1960.

Awarded Life Membership of the Aotearoa Maori Tennis Association in 2001

Inducted to the Maori Sports Hall of Fame 2003 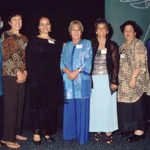 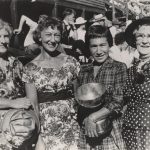 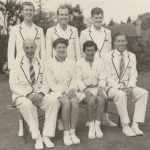 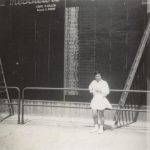 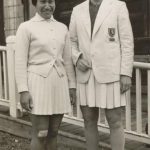 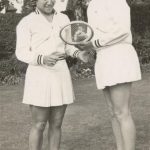 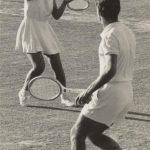 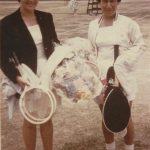 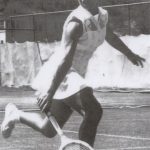 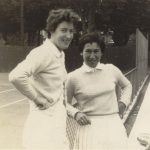 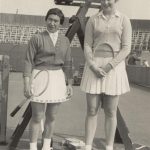 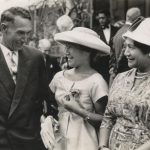 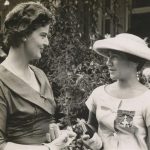 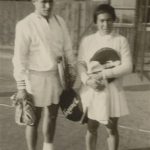 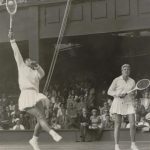 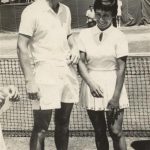 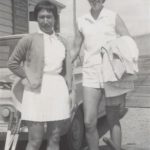 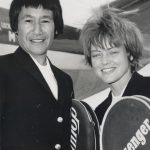 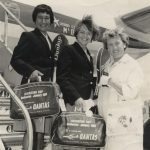 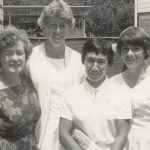 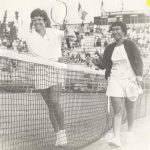 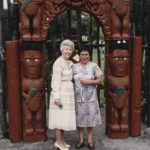 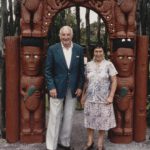 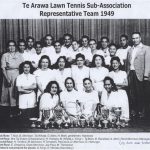 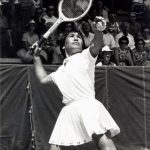 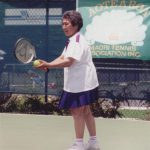