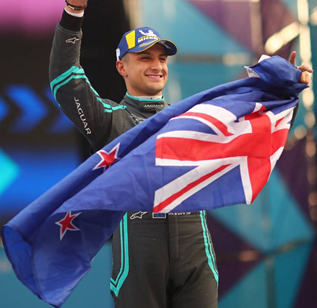 TIARN COLLINS (Ngāi Tahu) Snowboard Slopestyle
17 February 2020
Kiwi Tiarn Collins has won the latest round of the men’s slopestyle Snowboard World Cup in Calgary, Canada.
The 21-year-old has won with a score of 80.50 points, beating Japan’s Ruki Tobita into second. Compatriot Carlos Garcia Knight finished 33rd.
Collins sustained a shoulder injury just days before he was due to compete at the 2018 Winter Olympics and has been battling to make it back to top form ever since.

MITCH EVANS (Te Rarawa) Wins Mexico Formula E
15 February
Mitch Evans has moved into the lead of the Formula E championship after winning a chaotic Mexico ePrix.
The 25-year-old New Zealander moved one point clear of Alexander Sims at the top of the driver standings after steering clear of the carnage unfolding behind him on Sunday.