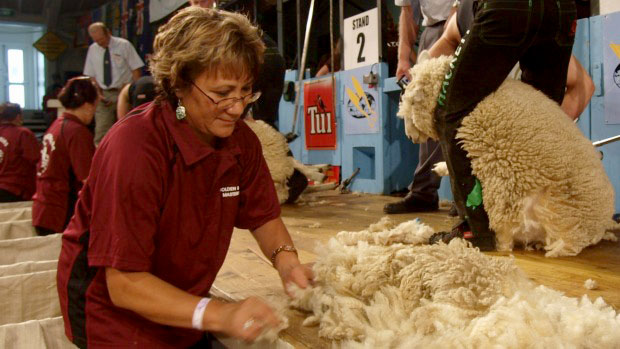 Governing for present and future generations

From shearing shed hand to corporate strategist to company director – it has been quite a journey for Mavis Mullins.

The latest accolade she has received is from Auckland University, which has just named her its Maori Women’s Business Leader of the year.

Earlier honours and responsibilities have mounted up: Landcorp director, Massey University councillor, helping create mobile network Two Degrees, chairwoman of Poutama and Atihau Whanganui Incorporation and a committee member of the Maori land protection agency Nga Whenua Rahui.
Mullins is a bit of a late bloomer. After having four children, and seen the oldest leave school, she decided to study for an MBA at Massey University.

She and her husband Koro had up until that point run a shearing business from Hawke’s Bay, in its heyday handling more than two million sheep a year. It’s a family thing – her grandfather was All Black legend Lui Paewai from the 1924 Invincibles, who was a shearing contractor.

” We did have teams that we would contract over into Australia and then, because globally shearing is quite a small industry and because New Zealanders are leaders in it, a lot of our people worked through the UK and Europe,” Mullins says.

Her MBA was agriculture-based. Her dissertation was related to quality management systems, and led her and her husband to seek ISO 9002 recognition, an international tick of approval – the first shearing business in the world to receive such an endorsement.

Studying did not come easy. Some of the difficulty came down to the language of academia and business, and the fact she was one of only two Maori on the course.

“It was horrible when I first started. I mean you get there and there is only two Maori, you kind of look for those things. So it was bit of a challenge but I couldn’t come home and tell Koro that I was hopeless and dropping out. Come hell or high water I was going to do this thing,” she says.

Already well connected through the Federation of Maori Authorities, in the late 1990s Mullins was invited by then-Minister of Women’s Affairs Georgina te Heuheu to sit on the board of Vehicle Testing NZ.
It was her first taste of governance at a high level and encouraged her to do the Institute of Directors course.

She was then appointed to the Landcorp board, and admits that with the push for diversity on state-owned enterprises, she “ticked all the boxes – I’m a Maori, a woman, and from a rural area with a degree.”

She might have felt intimidated sitting around a board table filled with “high fliers” but on farm visits she was in her element. Through her shearing days she came across people she knew who would say “thank goodness you are on there; at least someone knows what’s going on, on the land,” she says.

The Landcorp stint lasted seven years. At the same time she was shoulder tapped to help develop the radio spectrum allocated to Maori, out of which was born the Two Degrees mobile network. She chairs the commercial arm of the charitable Maori trust set up to run the spectrum.

Mullins tells a delightful tale of being handed a primer in how the business worked by someone who knew.

“He said ‘you know how a staple of romney wool is quite long and it’s big and wavy. Now you can get a staple of merino wool and it appears only half as long because it is a real crimpy little thing, but you stretch it out and it will probably go the same distance as the romney staple.

“‘Now that is what the airwaves spectrum is about. You’ve got the big old fashioned stuff which is like the romney staple, and the more advanced modern system is like the merino staple. It looks little, it is compact, and yet it’s the same but different’.”

Meanwhile she has not neglected the farming sector. The Aohanga Incorporation which she chaired is a farm of about 7200 hectares of hard country on the northern Wairarapa coast with 20,000 sheep and beef stock units. For the first time in its incorporated history it posted a profit in 2013.

Larger still is the 45,000 ha Atihau Whanganui Incorporation near Ohakune which is a “mix of everything including sheep, beef, dairy, forestry and honey”. Financially it has been performing well, music to the ears of its 7000 shareholders.

Mullins says she is “really excited” about the prospects for Maori agriculture, while acknowledging the difference in approach of Maori owners to Pakeha, and how that impacts on decisions.

Take ownership philosophy. Land is held in perpetuity, so decisions are made with a view to the long term. It can make decision makers risk averse, she agrees.

“If we never take a risk we never go anywhere and in the Maori world we carry quite a heavy responsibility. We are upholding the tipuna of the past, while dealing with future generations. Risk isn’t always bad, it’s about sensible risk, and failure can be a serious learning opportunity,” she points out.

A “sensible” risk the Atihau Whanganui Incorporation has recently taken has been to invest in a dairy farm which was part of the old Flock House farm training school near Bulls.

“Some said with the dairy prices in the cycle they are in potentially it was not clever, but our business model at present is 90 per cent exposed to red meat. Ensuring diversity is a clever thing. The price was good at time of purchase – $8.40. It’s all about spreading risk,” Mullins says.

Part of managing the land is knowing to conserve some, she says. She has become a keen advocate of the protection process Nga Whenua Rahui, the Maori equivalent of the QEII National Trust and is a committee member.

The fund has protected 180,000 ha of Maori land, with around 220 agreements. It has also approved 238 Matauranga Maori projects, to preserve the history and stories associated with Maori land and Tikanga.

The Fund has three elements: legal protection, operational management and monitoring, and administrative support. Staff report through the Kahui Kaupapa Atawhai division of the Department of Conservation. It has a permanent staff of nine, a number of temporary employees and a total annual budget of $6m.

“I think it has been magic, I mean let’s think if Nga Whenua Rahui hadn’t been here, what would we look like? We would probably have maybe less than 30 per cent of our covenants, and probably 75 per cent of our land would still have cattle grazing through it, with no juvenile forest coming through,” she says.

One difference between QEII covenants and Nga Whenua Rahui is that the latter are for 25 years, whereas the former are permanent.

“It’s not for this generation to make decisions for future generations. But this is a perpetual arrangement, the 25-year thing just gives all parties the opportunity to revisit the aspiration and values of conservation. Our expectation is that this is forever but we want people to recommit to that,” she says.

“Tena koe, e te tuahine, Mavis,
We are so proud to read in The Dominion Post (Thurs.May 7) of your award – Maori Women’s Business Leader of the Year. What a record of achievement!

It remembers your famous Paewai whanau name – All Blacks and all!

It uplifts all of us of Te Ao Maori! And as Kaumatua for The Aotearoa Maori Sports Awards I send our congratulations once again for your recognised leadership in that international sporting arena of Shearing.

It records your drive for personal educational achievement, giving rise to your outstanding contribution to NZ Farming.”
Sir Tamati Reedy