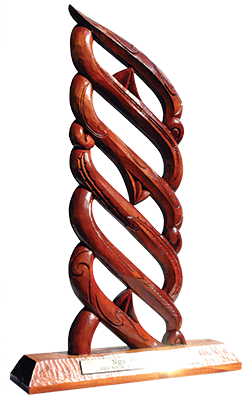 When Tāne ascended up to the heavens to seek “Ngā Kete o te Wananga” (the baskets of knowledge), his older brother Whiro was furious; he considered he had more right to the task than Tāne. So Whiro sent plagues of insects, reptiles and birds to attack Tāne, which complicated his task; but with the assistance of Tawhiri-mātea (god of the winds), he was able to continue until he arrived at the summit of the heavens. On his return expedition, Whiro and his plague again attacked Tāne; when he finally reached earth, Whiro insisted that he should be the custodian of the treasures. Tāne with his supporters rejected his demands so Whiro was eventually exiled to the underworld where he still dwells, and continually endeavors to wreak havoc for the gods and mankind. Therefore the team that displays the determination and audacity within their sports code should receive the honour and admiration of this award.